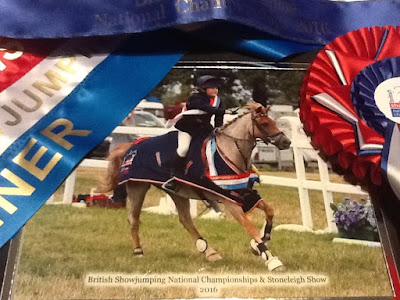 HUGE CONGRATULATIONS to Charlie Parker and her pony Secret who is now a British Showjumping National Club Champion!! The photograph shows Charlie enjoying her lap of honour after winning the 80cm Club Pony Championship at the BS National Championships at Stoneleigh yesterday.

Charlie who has been a competitor at Lane Farm from an early age and is an active member of Morpeth Hunt Pony Club, qualified for the Championships at Lane Farm's monthly Grandslam Shows, which include British Showjumping Club Classes.

"We are all so proud of you Charlie here at Lane Farm - Fantastico !!
Can't wait to here all about your very successful trip to Stoneleigh." Charlie was also second in the 70cm Club Pony Championship.
… Just so happens this weekend we have our Grandslam Show at Lane Farm.

Riders - this could be you next year, winning a Club Championship!
Join BS Club Showjumping for only £30.00 and accrue your points for placings at Lane Farm and qualify for next years Championships at Stoneleigh, rubbing shoulders with top Showjumpers at the Nationals!

WELL DONE CHARLIE and any other ‘Club’ members who competed at this years National Championships.